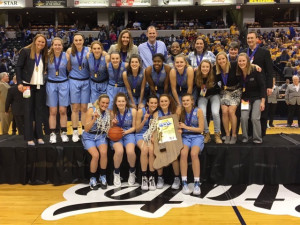 The victory makes coach Sydney Smallbone the first female in IHSAA history to win a state championship as both a player and a head coach. Smallbone, along with her assistants Melissa Lechlitner and Kristen Dockery, led the Indians to the state championship in 2005 as players.

This is the first year for the trio of coaches at their alma mater.

North Harrison led 11-10 after the first quarter before Saint Joe used a 13-2 run in the 2nd to open up a 28-18 half time lead. North Harrison closed within 7 after the 3rd but Saint Joe was able to keep the game in their control and pull off the 8 point victory.

No Events This Week

Events are added by athletic staff.
View All Events