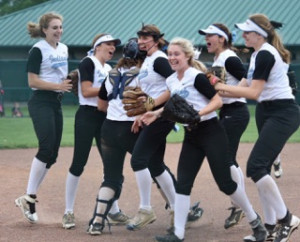 The Indians (23-4) advance to the Sectional Championship of the 3A IHSAA State Tournament with a 11-8 victory over conference rival Mishawaka Marian.

The victory avenges a 8-1 loss from earlier in the season when the Knights beat the Indians in conference play.

The Indians went ahead early in the “Holy War” on the diamond, leading 11-1 heading into the fifth inning. Grace Quinn had a two-run double and a homer, Halie Sade had a two-run double, and Taylor Kowalski had three hits and scored three runs to lead the Indian uprising.

But the Knights didn’t go away without putting up a fight.

Lizzie Bollinger and Meghan Urbanski, of the Knights, each homered in the fifth inning to cut the lead to 11-6. In the sixth inning, Bollinger homered again cutting the lead for the Indians down to three.

The Indians were able to close out the victory in the seventh and advance to play Jimtown (20-6) on Thursday at 6pm at Newton Park.

Lauren Sandor picks up the victory in the circle for the Indians.

Below are links to the multiple articles and videos about the game: