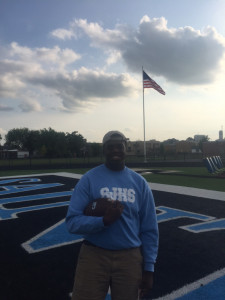 I have been doing Shakespeare with the Robinson Shakespeare Company ever since I was in third grade.  Last year there was a huge Shakespeare festival at the University of Notre Dame and the Robinson Shakespeare Company had the honor to hold workshops for those at the festival.  After we held our workshop,  we had people from England wanting us to perform and hold workshops for the Shakespeare Birthplace Trust and for The Globe.  We obviously and unanimously said yes.  During this time Notre Dame hired a film crew to document our journey from the start of rehearsals in February up to and throughout the trip.  Notre Dame also hired NBC to do a “We are ND” commercial that will be aired during Notre Dame Football games on national television. So on July 26th through August 4th we traveled to England, going to Stratford-upon-Avon and London.  We performed the Shakespeare play “Cymbeline” in the Great Gardens at the Shakespeare Birthplace Trust in Strafford.  We then went to London and did workshops at Shakespeare’s Globe.  We explored and went to all tourist attractions in London.  This experience was so amazing and I Ioved every moment of it.