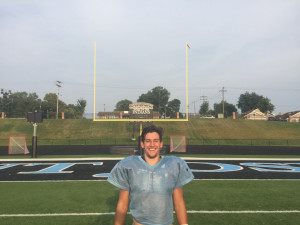 It pains me to my core to witness the gradual decline in popularity of the Saint Joe Football program and other programs around the area. With concussions and other dreadful injuries at the top of everyone’s mind, people have begun to seek alternatives to the seemingly dangerous game. However, I firmly stand by my notion that football, especially at a tradition-based program like Saint Joe, gives young men things that they cannot achieve from any other academic or athletic activity. At Saint Joe, we football players are taught to be the epitome of discipline, hard work, and dedication (traits that are usually lacking in most teens). These traits, along with a firm commitment to servant leadership both on and off the field, are what make Saint Joe Football so special and distinguished from other football programs.

Another trait that is unique in Saint Joe Football is the rich brotherhood between all players on the team. I have played other sports and I can firmly say that I have never felt the firm connection that I do with my football teammates. This brotherhood is also evident in the firm support of Saint Joe Football Alumni who constantly keep in contact and show support for the high school in a variety of ways. I have a unique personal testament to this brotherhood. Last year, in only the second game of the season, I broke my leg and rendered myself useless for the rest of the year. I cannot describe how upset and distressed I felt that my fellow teammates were preparing for battle on the field and I was unable to join them. I hated to think that my teammates were hitting and sweating on the field without me. Now that I have finally rejoined the team, I cannot describe the amount of fun I have playing the sport I love with some of the closest friends that I will ever have.