What Saint Joseph High School Football has meant to me
To most people, sports are something played for fun or as a hobby. That might be true for some sports, but almost all athletes will tell you otherwise. Sports are not simply a hobby and they are not something that just anyone can do or excel at. To be an athlete means that you have to be willing to work harder than other people in order to achieve a goal. You have to be willing to sacrifice yourself in numerous ways in order to be successful on the field of play. Football is the greatest of all these. Football teaches young men the importance of teamwork, hard work, sacrifice, and humility.
At Saint Joseph High School, the football team has always been more than just a team or a squad. At St. Joe, it is a brotherhood. It is a brotherhood for two reasons: First, everyone knows each other extremely well. Second, out on the field there is a brotherhood mentality. Stepping onto the field Friday night before the whistle even blew, I knew that the other ten players on that field with me were going to give their best effort every down. Every play, I could consistently count on my fellow teammates coming together in order to achieve our common goal. I only hoped that I played hard enough so that I would not let down the other ten men who were out there fighting with me. To me, Saint Joe Football has been the greatest organization I have ever been a part of so far in my life. It is because of Saint Joe Football that I have my closest friends, my brothers in life.
BLACK SHIRTS THROW IT UP 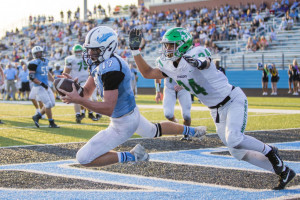 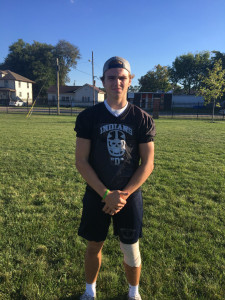