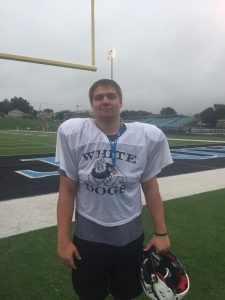 What Saint Joe Football means to me

Saint Joe football did so much for me as person and a football player. I went from being a little weak freshman to being a completely different person in the span of three years. The class above me in Godfrey, Faccenda, and Appleton along with the coaches helped me so much, improving my strength and technique on the field. Godfrey would text me after practices or on a day off and I’d go lift with him. There is no one who motivated me more to get stronger more than Godfrey and I hope he knows how much I appreciate that, I cannot thank him enough for where I am today. I am fortunate enough to be attending the Air Force Academy next year to serve my country and play football. Without Saint Joe Football this would have never happened. You cannot be a football player at Saint Joe without playing the game the right way and going 100% every snap. It is installed in you the first day you strap on the pads. You play with pride. You play for your brothers. That’s the first lessons the seniors last year made sure we knew and this senior class embraced that in every way. Saint Joe football in its tradition and great senior leaders gave me the push I needed to make me an even better player and make it possible for me to play at the next level and for that I will forever be in debt to this program. From the good people it has put me around to the tradition it installed in me I’m grateful to be an Indian.

The second part of Saint Joe football that means the most to me is the brotherhood. This senior class has been through thousands of hours of football together from two a days on the hot turf to games on Fridays. Day in and day out we show up and put in the work to get better every day. There have been plenty of times throughout my time here where no one inside or outside the school believed in us. For example we struggled our sophomore year on the Varsity. However the first winter lifting came and I have never seen more people at a lifting session. I was quickly reminded that this is still Saint Joe football and one bad year would not change the deep tradition this program is rooted in. As a rising junior class we saw the seniors work ethic and passion for the game and I was immediately reminded why I chose to go to Saint Joe. Throughout that year we had crucial players out to season ending injuries. Some of our best players like Vincent Gutermuth and Drew Boyer were lost for the season at a time where we could not afford it.. It would have been easy to give up and blame the season on injuries. But instead I saw why I believe Saint Joe Football is so great. People such as Casey Conery, John Paul Lewis, Dom Appleton, Michael Godfrey, Conor Ratigan became more committed to playing both ways every snap, every second of the game. These guys literally gave everything they had for their teammates and would come into Saturday practices barely able to walk, only to do it all again the next week. And that is why I love Saint Joe football and I love the guys I am fortunate enough to play with. There is nothing they don’t give for this team and I hope they know I do the same for them. There is nothing better than the brotherhood of a Saint Joe Football team and I wouldn’t trade it for anything. These last three years have been so much fun and there have been so many memories I will remember for a long time. If I could get another 4 years with these guys I would take it in a heartbeat because they are my second family and it’s hard to face the fact that this is my last ride with my guys.