What St. Joe Football Means to Me

For four years I have put my body and my mind into St. Joe football. St. Joe had a down year during my Freshman season and nobody in the locker room was happy about it. Everybody in the program worked their hardest to improve. The next season, we were a little bit better and we made it to the sectional championship, but it was still unacceptable. We needed to go further. I worked extremely hard to try to get on the field more my Junior year and it payed off. I saw a lot of playing time and the team as a whole was much better. We did better in the regular season but had a heartbreaking loss in the sectional championship. Now, it was up to my class to reach even higher. I worked every day to get better. I went to every offseason workout, watched film on this year’s opponents, and went to every single summer practice. Everything in my football career led up to this season where it would be my class’ turn to make a run. I was one of a handful of guys with a lot of varsity experience, so I would have to be a leader on and off the field. I had gotten stronger, faster, and smarter over the off-season. I was completely ready to lead my team and make a run at a state championship.

But all it took was a five-second long play during a preseason scrimmage to alter that. I broke my leg, tore up my ankle, and needed surgery which meant that I would be out for the season. I was devastated. I would never get to run out of the tunnel, never play my senior Holy War game, never wear a Black Shirt jersey on a Thursday practice, and never play another down of St. Joe football. I had and still have a hard time processing this, but St. Joe football has taught me a lot about responding to adversity. It’s difficult to face the fact that my playing career is done, but that does not mean my football career is done. Throughout my four years I have developed amazing lifelong relationships with my teammates and coaches. Many of them are also the people helping me though this setback.

I am extremely grateful that St. Joe football has given me an opportunity to remain a part of this team. I know that I am still a leader and teammate in this program, and my coaches and teammates have let me know that. It is hard dealing with the fact that I have to spend my Friday nights on the sideline with a pair crutches rather than on the field playing, but I am still eager to watch my brothers make a run at a state championship. St. Joe football has taught me so much about how to be a good leader, and I am trying to put those lessons into practice by helping the team in any way I can. I’ll always miss playing football for St. Joe, but I know that I have learned many life lessons, developed great relationships, and been shaped into the person I am today. 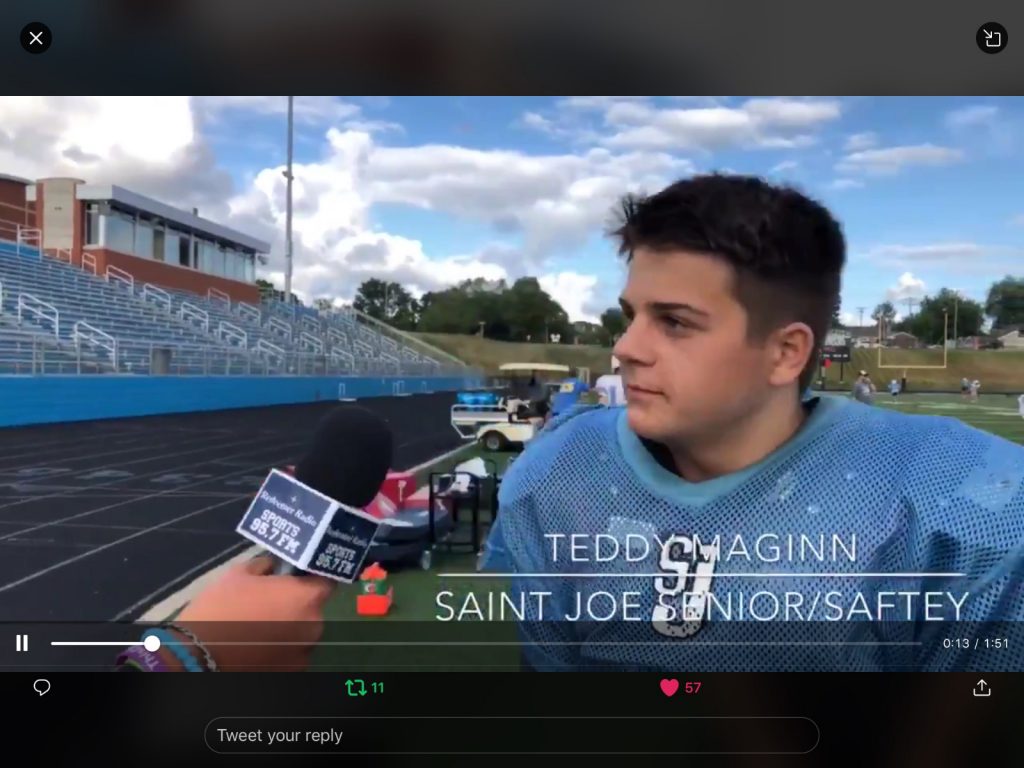