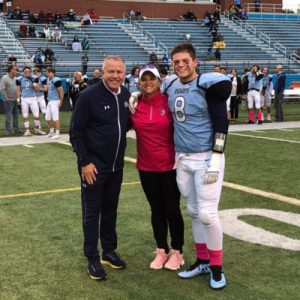 Coach Waltz asked me a simple question: “What does it mean to be a Saint Joe football player?” It seems like the answer would be easy, but in reality it is very complex.

It all started out when I was in grade school and would come to the Saint Joe games. I came to Father Bly field with all my friends wearing our ICCL Panther jerseys. We would always see these high school kids from Saint Joe who gave up a lot of size to the opponent, but that never stopped them from competing at a high level.

You would see an undersized defensive end for Saint Joe going up against some behemoth offensive tackle, yet that Saint Joe player would fight on. He attacked viciously on every down, whether it was a good or bad play. Upon seeing that I knew that Saint Joe was the place for me. Every Friday night during home games at Father Bly Field I saw a group of guys who just wanted to play some football with grit, and that’s all I ever wanted. Football is supposed to be played with a burning passion and a fire inside.

When I enrolled at Saint Joe my freshman year, the program experienced a head coaching transition. We had only 18 kids  total on the freshman team. We all played both ways and on special teams. It was a lot of football, but we were winning games with 18 people and I loved every second of it. I played everywhere: running back, “mike” linebacker, punt protector, and I was on kickoff and kick return.

Fast forward to sophomore year, and man that was a blast! I would play special teams for the varsity on Friday night and then wake up in the morning and play on the JV team in the morning. To be honest, taking on the extra repetitions was never really hard for me, because I love my brothers and my coaches. I would just get the ball and my instinct would take over, running it right up the middle, making sure I was always fighting for the extra yards (I’d usually get them, too!).  I hit the hole with my pad level low, willing to take on all defenders. We had many wins and a few losses, but I had my eyes on something else. I wanted to contribute to the varsity. During the off-season I would grind in the weight room, looking to become a player who could help the team out Friday night.

Junior year was awesome. We had such a good group of linebackers that I decided my path to the field was at defensive end. What passionate football player doesn’t want to play in the trenches? We had a great year filled to the brim with memories and laughs, but unfortunately it ended in a disappointing and hard-fought sectional championship game. I truly felt that both teams left their guts out on the field.

Now that leads me to my senor year season. We are having a very tough year. I would like to say our record doesn’t show how hard we have worked. We have played a gauntlet of a schedule against not only top teams in our area, but top teams in the state of Indiana. Our team has endured five season-ending injuries to key starters on the team. There are many sophomores stepping up and having to play varsity ahead of schedule. Through all of that my team has never lost the fighting spirit of those Saint Joe teams I grew up watching.

Adversity either breaks a man or makes him a better one. Regardless of how our season ends, I know that I am going to give it my all every snap because that is what a Saint Joe football player does. You never quit, not even when all the odds are stacked against you.

With that being said, I believe a true Saint Joe football player is passionate, and that passion transcends football. A Saint Joe player is someone who cares deeply about everyone on their team and everyone in their life. We always respect our opponents, but we do not fear them. Most importantly I think playing for Saint Joe means believing in something bigger than yourself, and believing that Christ always has your back.