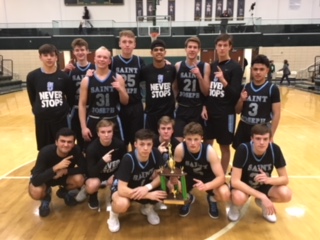 The Tribe brought home the championship trophy from the Wawasee Holiday Invitational.
Game 1 was a tough victory over Northridge 64-53. The St. Joe attack was lead by Hunter West and JR Konieczny scoring 16 points each. Brady Powers scored 15 and Ben Terry chipped in 11. The game was sealed by a clutch charge taken by Joel Stangebye. The championship game was against host Wawasee. It was a slow paced but action packed game that the Tribe won 34-30. Brady Powers paced the Indians with 13 and Phillip Robles added 6. 2 big wins with some bowling in between. It was a good day to be in the Tribe.

No Events This Week

Events are added by athletic staff.
View All Events